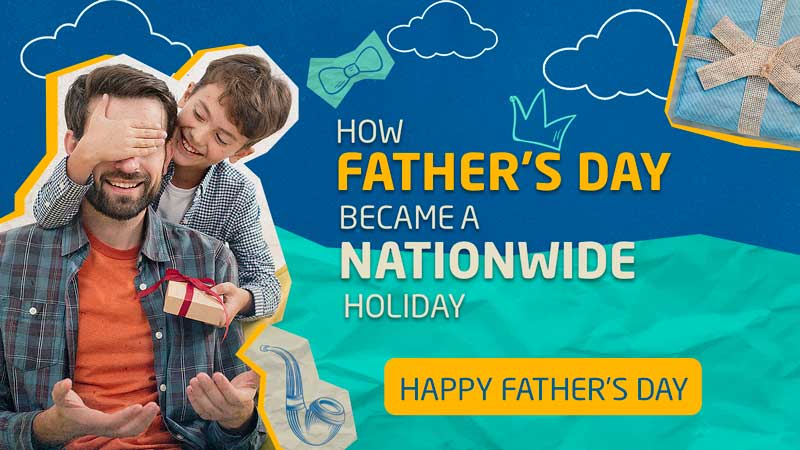 The people of Washington first celebrated Father’s Day on June 19h, 1910. But it did not become a national holiday until President Woodrow Wilson announced Mother’s Day Officially. Father’s Day then became a day to honor fathers on June 19th.

The nation’s first Father’s Day was celebrated on June 19, 1910, in the state of Washington. However, it was not until 1972—58 years after President Woodrow Wilson made Mother’s Day official—that the day honoring fathers became a nationwide holiday in the United States. Father’s Day 2022 will occur on Sunday, June 19.

Mother’s Day actually became an inspiration to celebrate Father’s Day, which was also not a commercial holiday until 1908. The daughter (Anna Jarvis) of the Activist Ann Reeves Jarvis played a prominent role in making Mother’s Day an official holiday. It was supported by retailers and later by President Woodrow Wilson.

However, the movement to celebrate Father’s Day did not achieve the zeal and support as Mother’s Day did. Maybe it was because of the reason that in those days Fathers haven’t had the same sentimental appeal as the mothers have.

It was July 5, 1908, when a church in West Virginia sponsored an event openly to honor fathers, in the memory of 362 men who passed away due to the explosions in Fairmont Coal company mines (Monongah). It was only a one-time tribute, that later became a statewide holiday due to the efforts of Sonora Smart Dodd, one of the children among 6, upraised by a widower. The first Father’s Day was celebrated across the nation on June 19th, 1910.

Gradually the holiday became famous that in 1916, president Wilson privileged this day by unfolding the flag in Spokane. Later in 1924, President Calvin Coolidge emphasized the state government to celebrate Father’s Day.

Nowadays, Father’s Day is observed on the third Sunday of June in the USA. The Father’s Day of 2022 is befalling on 19th June. In Latin America, Europe, and other countries, people honor fathers on St. Joseph’s Day (a traditional Catholic holiday celebrated on March 19).

Commercialism and disagreement with Father’s Day

There are many men who still scorn this day, according to a historian “this day is a sentimental attempt to domesticate the manliness with flowers and gifts. Or just a commercial trick to sell more products, which are often paid for and by fathers themselves”

The sellers and striving retailers multiplied their efforts to mark Father’s Day as a “second Christmas” for men. They promoted things associated with fathers such as Hats, socks, pipes, neckties, golf clubs, greeting cards, and other goods.

At the beginning of World War II, the advertisers conflicted that Father’s Day is a way to regard American troops and war exertion. Till the end of the war, it was not a federal holiday but a national tradition.

However, in 1972 in the mid of a tough re-election campaign, held for president, Richard Nixon finally declared Father’s Day a federal holiday. Today, to honor more than 70 million fathers in the United States, Americans spend more than $1 billion every year to buy gifts on Father’s Day. We hope you will have wonderful plans to excite your fathers this June. A Happy Father’s Day to you all.

Welcome to Kids In Kare Day Care Center where we emphasize an academic and social environment geared towards developing well rounded individuals. Kids In Kare is a childcare family owned and operated center, that has served the community for more than 10 years.

Texas Rising Star (TRS) provides us with benefits and necessary tools to provide our students with a higher quality education. We are required to have a weekly curriculum from Infants to After-Schoolers, all based on their age and learning level.